Slingbox is Slungbox: an End-of-Life Story 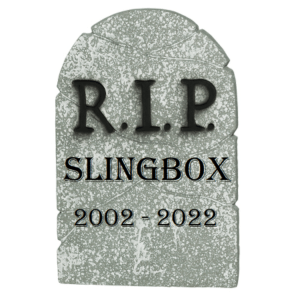 Do you remember Slingbox? For a while the service was all the rage, allowing subscribers to record and cast their television programming to a mobile device. If you wanted to keep up on local programming while on the road, Slingbox let you do it. If you were somewhere where you couldn’t access your favorite premium channel program and wanted to keep up on the latest episode, Slingbox let you do it. It was a nifty service. But then streamers like Netflix, Hulu, and Amazon Prime, and Apple TV ate into cable television’s marketshare and Slingbox became less appealing.

In November of 2020 Slingbox’s owner, Dish Network, announced they were end-of-lifing Slingbox on November 9, 2022, starting the long goodbye. That date arrived last week and the once-popular devices were bricked. Credit to Slingbox for putting an end-of-life (EOL) plan in place, pushing the news to its customers, and giving them two years to make whatever alternate arrangements were necessary. For die-hard Slingbox fans the end of an era might have been sad day (although some clever people have created a hack to keep the boxes going), but at least no one can say they were taken by surprise.

Have a Plan for End of Life

We’ve addressed the important issue of putting an EOL plan in place and why it’s important for commercial technology especially. Like Slingbox, Qlik announced in 2019 that it was going to retire its popular Repliweb data management software on January 31, 2022 and made sure every customer that used the product had ample time to make plans to transition to a Repliweb replacement (like our own Diplomat MFT). Qlik did EOL right when it retired Repliweb.

(If you were a user and are still looking for a replacement for Repliweb, why not click the button below and learn how to replace Repliweb with an alternative solution: CLICK HERE FOR HOW-TO GUIDE)

Not All Endings are Happy Endings

Not all EOL stories have a happy ending, however. In 2020 a legacy file transfer appliance that had been around for twenty years was rendered obsolete by its maker. The operating system at the heart of the appliance was discontinued and the company announced that it would no longer support the old appliance and was transitioning to a new product. It’s hard to say what happened, but some users of that device apparently didn’t get the memo, or got it but the message was not clear. Knowing that any of those devices remaining in service were vulnerable, threat actors went to work and breached major brands like Kroeger Supermarkets and global petroleum giant Royal Dutch Shell.

For vendors who plan to retire any product in their portfolio it is imperative to make sure an EOL plan is in place early, communicated relentlessly, and that all affected parties understand the implications to their operations, including data security. It’s the right thing to do.

As a consumer appliance, Slingbox’s end of life might only represent a minor inconvenience for its former users, but there is a lesson for commercial organizations. Whether it’s how to plan and implement a product’s wind-down, or a reminder to have contingency plans in place for any major technical transition—expected or not—nothing in IT lasts forever. In our own industry we’ve seen products disappear, or diminish in quality, due to acquisition. What had been a flagship technology in one vendor’s product portfolio could become an expensive afterthought for the new owner, necessitating a replacement.

If you are looking for a trusted product from a reliable vendor to handle your organization’s managed file transfer needs, consider Coviant Software. We’re the top-rated vendor in our industry. Contact us for a demonstration today.